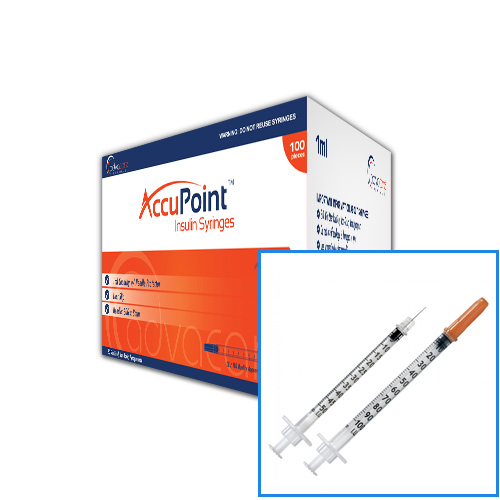 An insulin syringe is a medical instrument that is expressly designed to administer insulin into the body via injection. It has a short, fine needle attached to it that breaks the surface of the skin, and a pump that, when released pushes and deposits insulin, a hormone secreted by the pancreas into the body.

Insulin syringes makes up an important part of modern health care for diabetics suffering from both Type 1 and Type 2 diabetes, but they must be used in exact accordance with FDA rules and regulations so as to avoid running the risk of various blood-borne diseases, such as HIV, AIDS, or Hepatitis, etc. For this reason it is extremely important to note that insulin syringes are only meant to be used a single time, before being safely disposed of.

Specially manufactured so that one can administer insulin into their body to combat Type 1 and Type 2 diabetes.

Easy to use and require minimal instruction to learn how to handle.

Specially designed for U-100 Insulin, the standard type.

Comes with shorter, finer needles because insulin injects under the skin instead of into muscle, so it doesn’t have to go in as deeply, which also means the injections will be less painful.

Easy to measure Insulin dose thanks to markings on the sides of the barrel.

Insulin syringes are almost exclusively used by people who suffer from Type 1 or Type 2 Diabetes, to administer insulin into their bodies.

AccuPoint™ Insulin syringes are made out of a variety of high quality materials, such as a precision needle, medical grade polypropylene for the barrel and plunger, as well as a rubber plunger and tip/piston that fits perfectly to ensure for a reliable seal (medical grade silicone oil lubricant).

Fixed Needle Hub: The insulin syringe only comes in one variety, and that is Fixed Needle. This means that the needle is fixed onto the syringe needle hub rather than screwed or slipped into place. It is a leak-free system and is ideal for liquids with a thinner consistency.

Can I reuse my insulin syringe?
No. They are meant only for a single use; anything other than that is in direct violation with FDA rules and regulations. Reusing needles dramatically increases the chances of spreading blood-borne diseases such as HIV, AIDS or Hepatitis.

Can I sterilize my insulin syringe and THEN reuse it?
No. See above question.
What is the purpose of the plunger cap?
It is a form of child-proofing, to ensure the syringe doesn’t accidentally get filled with anything other than insulin.
What does the ml/cc on the insulin syringe stand for?
ml stands for milliliter, and cc stands for cubic centimeter. One ml is the same as 1cc.
Why is the needle on the insulin so short?
Unlike most shots, insulin only needs to go into the subcutaneous layer of the skin, which is the layer of fat directly under the dermal layer. Most shots are administered into the muscular tissue and thus require longer needles.
What do I do if the packaging is already open?
If the packaging is already opened, the syringe will no longer be safe to use. The sterilization process will have been compromised. You must immediately dispose of the syringe without using it.